Released in 1974, ¡Sesame Mucho! was Sesame Street 's first bilingual album. The album featured guest stars Malo, José Feliciano, and Vikki Carr singing with the Muppets and human cast, as they taught them Spanish words and phrases. The first edition of the album included all of the lyrics to the songs printed on the inner sleeve. This album was later re-issued under the title Welcome! 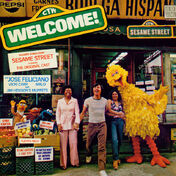 Welcome to "Sesame Mucho!" (¡Bienvenidos a "Sesame Mucho!") The Children's Television Workshop is proud to present what we believe is the first nationally distributed bilingual recording for the millions of children of both Spanish and English speaking backgrounds. The songs of "Sesame Mucho," as performed by the Sesame Street cast and our Latin guest stars (Jose Feliciano, Vikki Carr and Malo), combine the richness of two cultures with the magic of childhood. Young and old alike will delight in this unique musical and educational experience. After listening to "Sesame Mucho," we're sure you'll agree with Big Bird and Luis that:

(The above note was also included in Spanish.)