Sesame Street's 10th Anniversary Album was released in 1978 and was a limited edition LP which featured 25 greatest hits from the show's 10 year history. Dialogue was edited from many tracks in order to fit as many songs as possible onto a single LP. The album was packaged in a special reflective silver gatefold sleeve, the inside of which featured the lyrics to all of the songs. The 10th anniversary packaging also included 12 autographed photos "suitable for framing" of the entire cast and Muppets.

This album was later re-released as CTW 89002, with the title, The Anniversary Album, in a 2-LP configuration. This version had a gatefold sleeve with the lyrics inside (but no cast pictures), and the tracks were in a different running order: 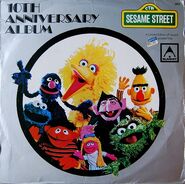 CassetteSight & Sound
GNL-225
Add a photo to this gallery

Retrieved from "https://muppet.fandom.com/wiki/10th_Anniversary_Album?oldid=425775"
Community content is available under CC-BY-SA unless otherwise noted.