21 is a number that comprises the sequence of digits 2 and 1 of the Arabic Numeral System—the most widely used numeral system in the world. The number 21 first appeared on Sesame Street in 1986 (when sponsor numbers below 2 and above 12 were first permitted). The number 21 has sponsored only three episodes: Episodes 3073, 3148, and 3412 (a repeat of 3148), all of which first aired in the mid-1990s. It remained the highest number to sponsor an episode of Sesame Street for several years, until producers chose the number 40 as a special feature in Episode 4187 (the Season 40 premiere). 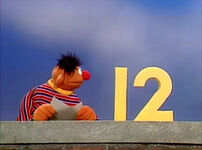 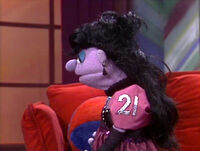 Numberella
(First: Episode 2316)
Add a photo to this gallery
Retrieved from "https://muppet.fandom.com/wiki/21?oldid=1248481"
Community content is available under CC-BY-SA unless otherwise noted.