456 Sesame Street later appeared on the show, as a brownstone building, when Sesame Street went Around the Corner in Season 25. The building housed the Day Care Center, which was operated by Angela, who lived in the building with her husband Jamal and their daughter Kayla.

In Episode 3991, after the Around the Corner sets had been abandoned, the address referred to the apartment building housing Hooper's Store, whose front door lies between the store and Mail It Shop, which was previously (and once again) known as the Fix-It Shop.

In Trick or Treat on Sesame Street, the address number is applied to Count von Count's castle. 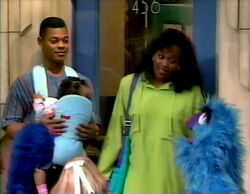 Add a photo to this gallery
Retrieved from "https://muppet.fandom.com/wiki/456_Sesame_Street?oldid=1109214"
Community content is available under CC-BY-SA unless otherwise noted.