In 2001, the Arts & Entertainment Network (A&E) produced an episode of their television documentary series Biography focusing on the history of Sesame Street.

Hosted by Harry Smith, the hour and one-half special features interviews with Loretta Long, Bob McGrath, Sonia Manzano, Caroll Spinney, Steve Whitmire, Cheryl Henson, Kevin Clash, Frank Oz, and Joan Ganz Cooney. Some of the topics discussed in the documentary include the test pilots, Jim Henson's early works, Mr. Hooper's death, the development of scripts (such as in the Season 32 hurricane episodes) and characters (specifically, Lulu) and the popularity of Elmo. Rare behind the scenes filming of episodes 3954 and 3978 is also included.

A&E released the documentary on VHS and DVD-R. 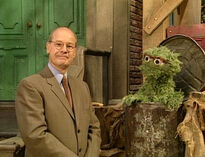 Oscar the Grouch and Harry Smith 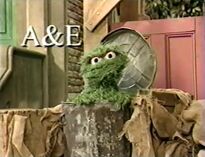 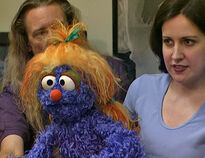 Lulu makes her debut to the writing staff with Stephanie D'Abruzzo and Steve Whitmire. 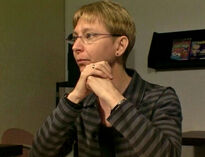 Judy Freudberg consults on a script. 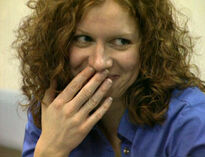 Christine Ferraro in the writer's room.
Add a photo to this gallery

Retrieved from "https://muppet.fandom.com/wiki/A%26E_Biography:_Sesame_Street?oldid=694667"
Community content is available under CC-BY-SA unless otherwise noted.