A Baby Sister for Herry is a 1984 Sesame Street storybook that follows Herry Monster as he deals with the arrival of his new baby sister, Flossie.

The day after Herry's baby sister is born, he visits his mother in the hospital, and she shows him the baby, Flossie, in the nursery. She arrives home a couple of days later. Herry has a hard time adjusting to his new sister, who cries when Herry makes noise playing with a toy fire truck, and is too young to play with him. The baby interrupts Herry and his father making a puzzle because she is hungry, and uses his old blanket. Every weekend, friends and relatives visit to bring her presents and take pictures of her, and Herry feels left out.

Frustrated that everything for the baby is special, Herry imitates Flossie. He drinks milk from a bottle, ends up breaking the baby swing, and shakes Flossie's rattle in the playpen, and finally cries. His mother shows him his own baby pictures. And that evening, his father tells him that "being a big brother is an important job". He learns how to give the baby her bottle, dress her to go outside, feed her and sing her lullabies. Later, Herry shows his friends how to care for Flossie. Herry feels proud when Bert tells him that she looks just like Herry.

Later, as they take Flossie for a walk in the park, Herry's mother offers to buy him an ice cream cone later because while Flossie isn't big enough for one, they are. 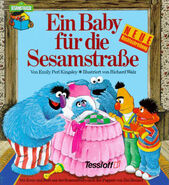 Hebrew edition
Add a photo to this gallery

Retrieved from "https://muppet.fandom.com/wiki/A_Baby_Sister_for_Herry?oldid=1277483"
Community content is available under CC-BY-SA unless otherwise noted.