Baby Piggy wakes up early one morning. While she finds Baby Kermit still sleeping, she finds a love note made of buttons, yarn, a banana peel, and other kinds of stuff along with some kind of gibberish writing. Piggy thinks the note could be from Kermit and begins to imagine what the writing might say. Piggy imagines she and Kermit get married and then they go off in a big blue balloon to Paris, the jungle, and to China. Kermit calls her different kinds of food while Piggy wants something to eat.

When they are inside the restaurant, the waiter comes over with a dish and Piggy immediately knows who he is. It's Baby Gonzo. When Gonzo asks her if she likes the dish, he pokes Piggy back in the nursery, Gonzo asks her if she likes the love note he made. Piggy is upset and bursts into tears. She then goes over to Kermit and shows him the letter telling him he can't believe the love note isn't from him, especially after he called Piggy the little food items. Kermit doesn't understand, but tells Piggy to join in to have breakfast. Piggy starts to feel better and smiles when Kermit asks her to play with him after breakfast. They pretend to go around the world in the big blue balloon. 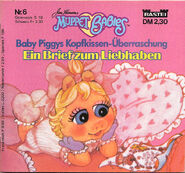