Through a series of pages layered via a translucent window, the book depicts the Cratchit Family celebrating Christmas, while Charles Dickens (The Great Gonzo) and Rizzo the Rat appear on the front and back covers.

The back cover is notable for identifying not only the Muppets credited in the movie for playing Christmas Carol characters, but also three who had previously been unidentified: "Miranda & Melinda" as Betina and Belinda Cratchit, and "Simon" as Peter Cratchit. 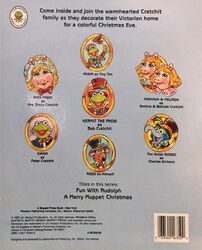 Retrieved from "https://muppet.fandom.com/wiki/A_Merry_Muppet_Christmas:_Through_the_Window?oldid=1228327"
Community content is available under CC-BY-SA unless otherwise noted.