Later, Fozzie is outside building a snowman while some of the other Muppets (including Billy the Bear and some woodland creatures) chop down a Christmas tree, when Rowlf shows up (and slips on the icy patch). He engages in a friendly conversation with Sprocket, and sits down to Emily's out-of-tune piano and starts playing "Sleigh Ride." Fozzie starts singing along, during which the Snowman comes to life and starts up a comedy act with the bear. When they get a positive reaction from some woodland creatures watching their act, Fozzie runs inside to try to tell Kermit about his new act with the Snowman, slipping on the icy patch on the way in, but Kermit is called away by another Miss Piggy telephone message. This time, she's doing some last-minute Christmas shopping. Elsewhere in the house, the Swedish Chef has been tricked by the Christmas Turkey into believing that Sprocket is an even bigger turkey. Doc corrects the Chef's species confusion, and then the Turkey begins hitting on Camilla.

Scooter stumbles upon an old home movie of the first Christmas the Muppets ever spent together, so the Muppets sit down to watch it. The old footage shows the Muppet Babies singing "Santa Claus Is Coming to Town," while the fully-grown characters give commentary. At the end, when the baby Animal rips through a gift box in the film, the fully-grown Animal tears through the screen. 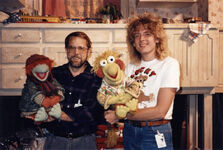 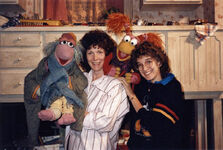 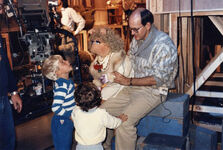 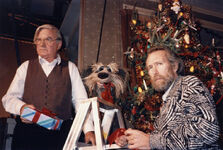 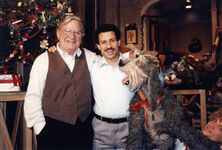 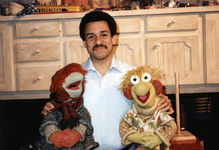 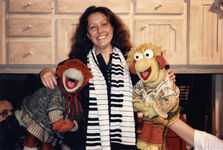 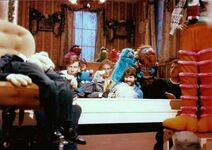 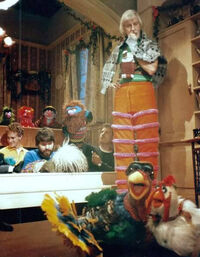 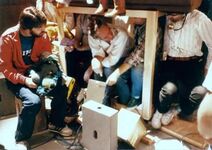 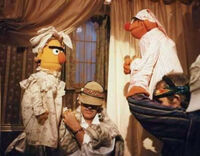 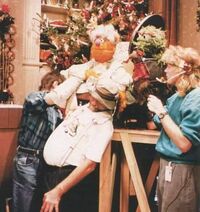 Retrieved from "https://muppet.fandom.com/wiki/A_Muppet_Family_Christmas?oldid=1238492"
Community content is available under CC-BY-SA unless otherwise noted.