A Muppets Christmas: Letters to Santa

A Muppets Christmas: Letters to Santa is an hour-long Christmas special starring the Muppets, which first aired on December 17, 2008 on NBC. The plot involves the Muppets mistakenly intercepting three letters sent by children to Santa Claus and their attempts to fix the problems created by their mishap.

A DVD of the special was released on September 29, 2009.[1] The disc's bonus features include deleted scenes and interviews with the cast.

A soundtrack album of the four original songs from the special was released for download on the iTunes Store and Amazon.com on November 23, 2009.

The program opens with the Muppets waiting in line at the post office to mail their Christmas cards. While there, the Muppets mistakenly intercept three letters sent by children to Santa Claus. Later, Claire, a young girl who lives in the same building as the Muppets, is disappointed when Gonzo reveals that the Muppets will not be around for Christmas as they are all going on vacation. However, the Muppets soon realize that the spirit of the holidays is more important than their vacation, and they attempt to fix the problems created by their mishap and get the averted letters to Santa Claus before Christmas. They rush to the airport via taxi, where they encounter Joy, a friendly ticket agent, and Officer Meany, a bitter airport security guard. They try to catch a flight to the North Pole before it's too late.

Some unspecified last-minute additions to the plot were taken from the unproduced special The Muppets Run for President.[2] 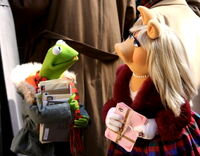 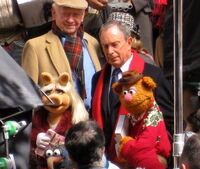 Mayor Michael Bloomberg joins the Muppets for the filming. 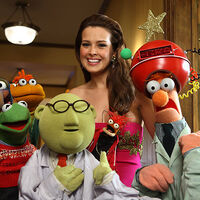 Animal in a NBC promo