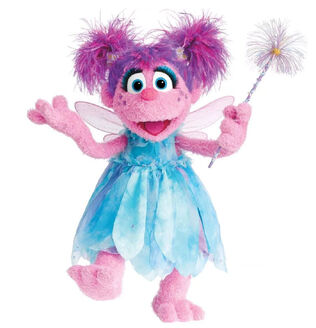 Abby Cadabby is a three-year-old fairy-in-training who lives on Sesame Street. She made her debut in the first episode of Sesame Street’s 37th season, when she moved into the neighborhood and met some of the Street's residents. On the day of her debut, her wand broke; Big Bird told her to take her wand to the Fix-It Shop where Maria would fix it. Starting in season 40, she received her own CGI-animated segment, Abby's Flying Fairy School.

Her name is a play on the magic word Abracadabra. Abby's magical powers are limited to popping in and out of thin air, floating when she's happy, and turning things into pumpkins. Although familiar with the world of fairy tales, Abby is astounded by such basic learning skills as drawing letters or counting, prompting her catchphrase "That's so magical!" She frequently uses her wand cell phone to call her mommy. When she's asked to return home, she says that she's "gotta poof."

She can speak a language called Dragonfly and is teaching Rosita the language, while Rosita teaches her Spanish.[1] Along with Baby Bear, Abby begins attending school in a 2006 episode at the Storybook Community School, where Mrs. Goose is the teacher and other fairy tale characters like Hansel and Gretel are her classmates.

Tony Geiss conceptualized Abby as a way to simultaneously introduce a major female character to the show and add someone from a different culture, without "having consciously to introduce somebody from Indonesia or India."[2] Abby's design is an intentional departure from the typical Muppet look because she's not originally from Sesame Street. The implication is that the fairies in her old neighborhood look like her. [3]

Abby's likeness has been adapted for a 43-foot balloon which premiered in the 2007 Macy's Thanksgiving Day Parade, a full-body costume character for stage appearances and a number of merchandise items.

In 2008, Abby was added to the cast of Plaza Sésamo, the Mexican co-production of Sesame Street, appearing in new segments where she tries to perform magic tricks with various ordinary objects. In 2009, she became the host of 3, 2, 1 Vamos!, a Latin American pre-school programming block, which first aired in English in 2010, on Canadian television.

“We have our wacky, and we have our gentle. But we wanted a lead female character. If you think about Mary Tyler Moore, some girls relate to Rhoda, who's our Zoe, and some girls really relate to Mary, who’s a girly girl. And we didn’t have that girl. We made a definite decision to sit down with the writers to figure out what this character might be.”