Abigail is a little purple monster on Rechov Sumsum, the Israeli co-production of Sesame Street. She also appeared in Shalom Sesame. She likes to play with the neighbors on the street and looks up to her adult friends, Gershon and Anneliese.

Abigail is mostly seen in segments where she talks with a famous Israeli guest star and sings a song with them (most notably Ronny Rock singing "En Den Dino"). She also has her own recurring segment, "Abigail's Quiz Show". Much like Sesame Street's Elmo, Abigail refers to herself in the third person.

While the Rechov Sumsum page on Sesame Workshop's "Around the World" website spells the character's name "Abigail," the English subtitles on the DVD release Meet Oofnik the Grouch use the spelling "Avigile."

She was featured on the front page of Israeli Google on November 4, 2009, to celebrate the 40th anniversary of the American Sesame Street. 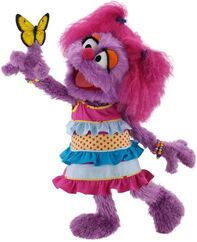