Ace Yu is the hero of Dog City, the Muppet special that aired as part of episode 104 of The Jim Henson Hour. He was raised by Mr. and Mrs. Howe Yu, and has a pink bow in the Pekingese art of "Whyioughta." The latter expertise does not spare him from being pummeled by the henchmen of Bugsy Them.

He made cameos in "The Secrets of the Muppets" during the meeting of the O.M.D. (Organization of Muppet Dogs) and The Muppets at Walt Disney World during the "I'm Doggin' It" song.

The Ace Yu puppet was later reworked into Eliot Shag for the Dog City television series (the puppet was modified to have live hands instead of rods). He was also the inspiration for Eliot's animated alter ego, Ace Hart. 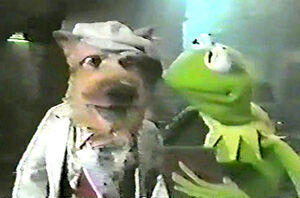 Ace Yu with Kermit the Frog
Add a photo to this gallery
Retrieved from "https://muppet.fandom.com/wiki/Ace_Yu?oldid=1140076"
Community content is available under CC-BY-SA unless otherwise noted.