Alam Simsim is the Egyptian co-production of Sesame Street. It is co-produced between Al Karma Edutainment and Sesame Workshop and funded by USAID under a bilateral agreement with the Egyptian Ministry of Education.

The show airs on ETV and MBC, and can be seen via satellite across the Middle East (dubbed into Classical Arabic), and in Iraq on Alsumaria Iraqi Satellite TV Network.

The show is set in the imaginary Alam Simsim (Sesame World) neighborhood in Egypt. This area is Medieval-looking like Old Cairo except perhaps more rural and green. It consists of a small public square surrounded by a park; a store owned by 'Am Gherghis; the carpenter's shop owned by 'Am Hussein with apartments above occupied by 'Am Hussein's family, 'Ama Kheireya his wife, Mona his teenage daughter and Kareem his young son. A bookstore or library (the same word is used for both in Arabic so it is hard to tell which is intended) is run by a young woman named Nabila. The humans are referred to as 'Am and 'Ama, which are "Uncle" and "Aunt" in Egyptian Arabic. These titles denote familiarity common in Egyptian neighborhoods.

The show also includes three main Muppet characters who interact with the humans in the neighborhood just as they do on the original American program. Nimnim (tiny) is a large green furry character who wears a skullcap and patterned vest. He is a somewhat gentle and naive creature who enjoys gardening. Khokha (peach) is a furry pinkish orange colored monster with long black hair. She is a very inquisitive, imaginative and confident character who's main message is to encourage young girls. Filfil (pepper) is a bearded furry purple monster who often gets carried away with himself. He is a bit egotistical and loves to eat honey-sesame sticks.

Alam Simsim reuses many of the sketches from other versions of Sesame Street, dubbed into Egyptian Arabic. Some of these include segments using American Muppets, however some names are changed. Ernie and Bert are known as Shadi and Hadi, Elmo is called Tohfa (antique), Telly is named Mosaad , and Grover is Antar. Kermit is simply called Kermit.

The use of language in Alam Simsim is designed to serve multiple purposes as part of early childhood education. The letter and reading segments are taught in Modern Standard Arabic which is the language that all Arabic children will use for reading and writing. However, the skits are all in Egyptian Arabic dialect, that used in Egypt for regular interaction.

For example, a segment on the letter Sin will show a picture of a car and call it by the Standard Arabic name, Sayara. However, cars that appear in skits will be called by the word 'Arabiya, as they are commonly known in Egypt. In this way, children learn that there are two words for the object depending on the context and therefore are not confused when learning to read Modern Standard Arabic. This is the same way that a bilingual child learns words in different languages at the same time.

Alam Simsim also introduces the very first Arabic alphabet song created by the show's producers so Egyptian girls and boys will sing their alphabet for the first time.

Nine Alam Simsim DVDs have been released in Egypt to date. All feature segments from the show loosely based around themes:

The Adventures of FilfilMoghamarat Filfil

The Adventures of KhokhaMoghamarat Khokha 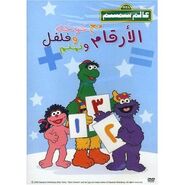