Alarm im Zirkus (Alarm at the Circus) is a 50-minute German TV movie starring Wolle and Pferd of Sesamstrasse, and featuring supporting characters from their spin-off, Eine Möhre für Zwei.

Wolle and Pferd have to free their friend Günni the talking (and newly bubble-blowing) toilet, after he gets kidnapped by circus director Roberto Grimm and his henchman, the circus rat Fido. Held captive behind bars, Günni is to serve as the failing Circus Grimm's newest attraction in order to lure in a bigger audience and get the circus folk back out of debt. With the help from Grimm's daughter Lotta, goat trainer Olga, and old circus magician Imago, Wolle and Pferd might just be able to help their old friend escape, but their new friends' struggle for survival is real as well.

This is the spin-off's fourth movie, following season 5's Die Zeitmaschine, and it is actually part of the show's 6th season. It aired on December 25, 2018 (as a special Christmas event), on children's TV network KIKA in four cropped parts (omitting scenes). On April 20, 2019, it aired in full as a special Easter event on KIKA. 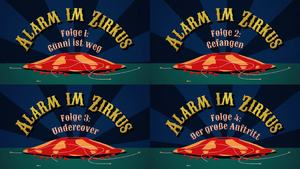 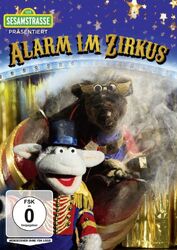 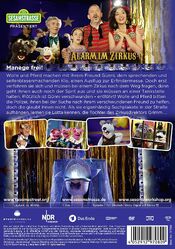 DVD release
(back)
Add a photo to this gallery

Retrieved from "https://muppet.fandom.com/wiki/Alarm_im_Zirkus?oldid=1163734"
Community content is available under CC-BY-SA unless otherwise noted.