Albert Einstein (1879-1955) was a theoretical physicist known to the world as one of the most important figures in 20th-century science.

The Season 20 version of Sesame Street’s opening title sequence began with a shot of a statue of Einstein. Sculpted by Robert Berks in 1979 from a bust he created in 1953 of a live Einstein, the larger than life-size statue sits on the lawn of the National Academy of Sciences building in Washington, D.C. at Constitution Avenue & 22nd Street NW, just 400 yards north of the Lincoln Memorial. [1]

Einstein reached such worldwide fame that he became a figure of celebrity, and thus the subject of many pop-culture references that exist to this day. A particular facet of his personality that was a favorite of satirists was his accent. As a result, caricatures of scientists in situation comedy roles are frequently equipped with a mock German accent. One such example is the Sesame Street character Professor Nucleus Von Fission.

One of the most important contributions Einstein made to the world was his formula stating that energy equals mass times the square of the speed of light inside a perfect vacuum, or, E=mc². It was this discovery that would lead to a number of advances in science, and only helped to advance his popularity. The formula itself exists as a celebrity, having made appearances in countless cases that have called for simple scientific formulae. One such example can be found in the 1966 film The Idea Man, when Limbo speaks of ideas that have already been thought of, while Dr. Bunsen Honeydew was often fond of scribbling variations of the formula in his notes found in the pages of Muppet Magazine (one illustrated representation of his mind included the equation E=mice² next to a doodle of his mother). Other instances have included a representation of Dorothy's thoughts about school in a segment of Elmo's World, a visualized thought 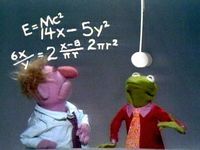 in a classic recurring Muppet sketch, a book titled with the equation in a Muppet comic strip, and a Muppet folder by Mead which parodies the equation as grEen=mc² (referencing both Kermit's skin color and an environmentalist angle, as the folder was part of a "Save the Pond" themed binder).

In the late 1990s, Apple Computer's "Think Different" campaign commissioned a one minute commercial showcasing some of the widely considered "geniuses" of our time, including Jim Henson and Kermit the Frog. Einstein's image opens the montage.

Though Einstein himself died before the Muppets reached prominence, he was a known fan of television puppetry. On one occasion, the physicist interrupted a high-level conference by announcing, "You will have to excuse me, gentlemen. It's Time for Beany."[1] 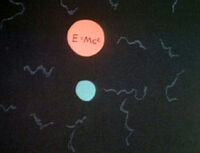 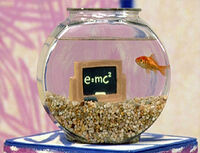 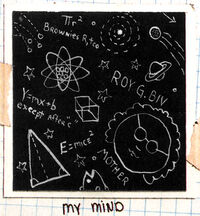 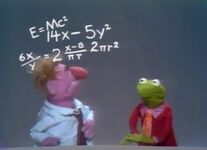 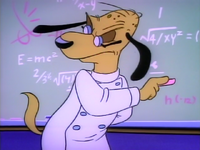 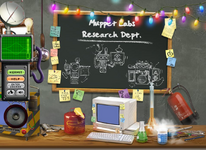 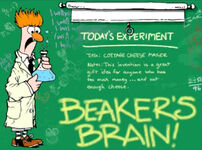 The Muppet CD-ROM: Muppets Inside 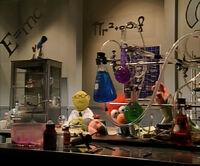 Wikipedia has an article related to:
Albert Einstein
Community content is available under CC-BY-SA unless otherwise noted.