To match his smoking jacket (and the stereotype of the urbane British host), Alistair Cookie used to appear holding a pipe, which he would consume by the end of each piece. These skits with Alistair Cookie's pipe could be identified by their "Union Jack" opening titles. By the late 1980s, the pipe was gone -- so as not to reinforce smoking as a positive attribute. Subsequently, the Alistair Cookie scenes in earlier skits were re-taped (without the accessory),[1] with the puppet being lip-synched to the original voice track performed by Frank Oz.

In a 2004 Chicago Public Radio interview, David Rudman referred to Cookie Monster's occasional use of more advanced phrases, such as "It a bit esoteric," as his Alistair Cookie side: "He throws out these words like, you know, 'Me digress.' It's his whole Alistair Cookie side... It's a whole 'nother side of Cookie, where he's just kinda, you know, laidback and intellectual, but he still has that 'Me Alistair Cookie,' and it's just such a funny contrast."

Alistair Cookie is generally a detached party who simply serves as a frame for the "Monsterpiece Theater" spoofs. Occasionally, however, the participants take their grievances directly to Alistair Cookie ("Twelve Angry Men", "One Flew Over the Cuckoo's Nest"), crash into his sanctum ("The 39 Stairs"), or otherwise disrupt his hosting duties. On rare occasions, Cookie Monster himself stars in the sketches, as in "Twin Beaks," invariably winning rave critical reviews from Alistair Cookie.

Alistair Cookie was first introduced in 1978 (Season 9 of Sesame Street). Alistair Cooke retired from Masterpiece Theater in 1992, replaced by American host Russell Baker, but this had no effect on Alistair Cookie, as reported in The Washington Post from February 24, 1993: "A spokeswoman for Sesame Street yesterday reassured its fans -- and their children -- that despite the change at the top, Cookie Monster will continue to appear as Alistair Cookie, the host of "Monsterpiece Theater" -- big chair, fireplace and all... 'We love that character,' said Ellen Morgenstern..."

Cooke himself was wryly appreciative of the take-off, predicting at a 1991 dinner celebrating the 20th anniversary of Masterpiece Theater that if he was remembered at all, he would be best recalled by fans of Sesame Street as "Alistair Cookie, the Cookie Monster of Monsterpiece Theater."

Alistair Cookie appeared hosting Monsterpiece Theater in the CD-ROM games Elmo Through the Looking-Glass, Grover's Travels and The Three Grouchketeers.

Alistair Cookie most recently appeared in select introductions on Sesamestreet.org for the theme of the day: 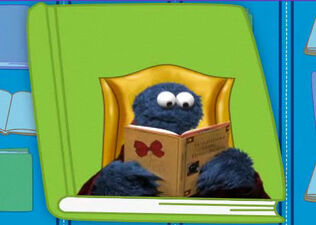 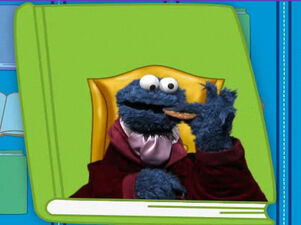