"American Woman" is a song by the Canadian band, The Guess Who, from their album of the same name. It was the first Canadian rock song to make to #1 on the Billboard Top 100 in 1970. It was also famously covered by Lenny Kravitz on the second Austin Powers soundtrack.

In 2010, the song was performed by Sam the Eagle in a Muppet viral video, partly as an ode to the Statue of Liberty. As Sam goes through the lyrics which deride the United States, he stops to announce that the song is a "slap in the face to American women everywhere." He becomes even more aghast when Kermit tells him of the song's creators' nationality. 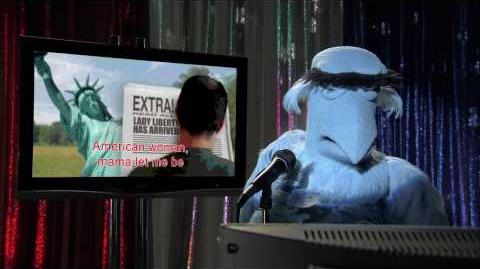 Retrieved from "https://muppet.fandom.com/wiki/American_Woman?oldid=1370508"
Community content is available under CC-BY-SA unless otherwise noted.