An Audience with... is a British variety television program, produced sporadically by ITV. The Muppets have appeared three times on the show.

The first appearance was in 2001, on An Audience with Kylie Minogue where Kermit sang "Especially for You" with Kylie.

Gonzo made a guest appearance in the 2005 special, An Audience with Joe Pasquale. Gonzo explains that he's returning the favor from when Pasquale appeared in The Muppet Show Live. The two exchange jokes, and Gonzo performs a magic trick where his doppelgänger appears in the audience.

On December 22, 2007, for An Audience with Celine Dion, Miss Piggy appeared in the last round of questions. Piggy thanked Dion for warming up the audience and wanted to know when she planned to get off the stage. Dion defended herself, saying that it's her audience. Piggy had a hard time understanding that, since she was told the show was an audience with the most famous, greatest diva in the world. (Star Trek star George Takei was also in the audience.) 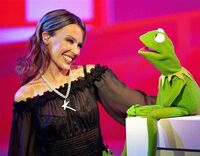 An Audience with Kylie Minogue, 2001 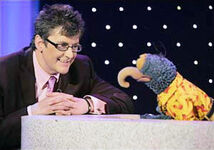 An Audience with Joe Pasquale, 2005

An Audience with Celine Dion, 2007
Community content is available under CC-BY-SA unless otherwise noted.
Advertisement