In July 1989, Jim Henson and Frank Oz made an appearance at the Puppeteers of America national festival at Massachusetts Institute of Technology. The event was documented and added to the Puppeteers of America audio-visual archive with a special introduction by Frank Oz made in 1993. Throughout the one-hour discussion, Henson and Oz perform Kermit the Frog, Rowlf the Dog, Cookie Monster, Animal, Fozzie Bear and Grover. some of the topics include the history of Henson Associates, research on Sesame Street, and behind the scenes info about the Muppets, The Dark Crystal, The Jim Henson Hour, and Little Shop of Horrors. Frank Oz also demonstrates how they perform the Muppets on film and television. 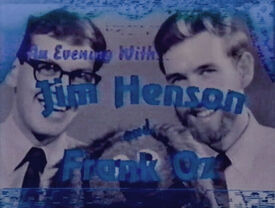 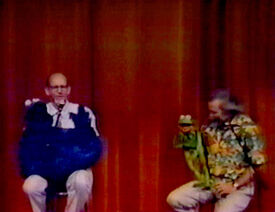 Oz with Cookie Monster and Henson with Kermit.
Add a photo to this gallery
Retrieved from "https://muppet.fandom.com/wiki/An_Evening_with_Jim_Henson_and_Frank_Oz?oldid=1277376"
Community content is available under CC-BY-SA unless otherwise noted.