Anders Öjebo (b. 1966) voiced Kermit and Miss Piggy in Mupparna I Rymden and Mupparnas Julsaga, where he also voiced Sam the Eagle and was one of the sound engineers. He voiced Cookie Monster and others on Lek med mig i Sesam (Play with Me Sesame).

In the Creature Shop effect movies he voiced N'Dugo and Kip in George of the Jungle, in 101 Dalmatians he voiced Alonzo among others and was the musical director.

Öjebo mainly does dubbing work, but can be seen on stage from time to time. Besides acting, he also works as a sound engineer and dubbing director. His voice credits include Disney's The Lion King, Return of Jafar, 101 Dalmatians (the animated series) as Pongo and many more.

He plays Brian in the Swedish adaptation of Avenue Q, that premiered in Maximteatern, Stockholm in February 2007. 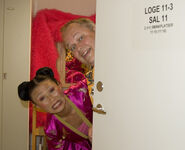 Anders Öjebo and Maria Kim, backstage at Avenue Q
Add a photo to this gallery
Retrieved from "https://muppet.fandom.com/wiki/Anders_%C3%96jebo?oldid=1106848"
Community content is available under CC-BY-SA unless otherwise noted.