Andrea Bocelli & David Foster: My Christmas is a PBS special hosted by David Foster. The two-hour special was taped on September 15, 2009 and aired on various days and times around the US in November 2009.

Kermit the Frog, Miss Piggy, Gonzo, Fozzie Bear, Animal, Pepe the King Prawn, and a few penguins appear alongside Andrea Bocelli, singing "Jingle Bells". The guest appearance is a tie-in with Bocelli's Christmas album My Christmas, on which the Muppets appear as well.

Since the special ran during a pledge drive period for most PBS stations, a short interview with Miss Piggy, asking the viewers to "cough up some dough," was included during a pledge drive break. The My Christmas CD and an extended edition DVD of this special were offered as gifts in return for donations to PBS stations. The DVD was also released for regular retail sale.

Other guests in the special include Mary J. Blige, Natalie Cole, Katherine Jenkins, Reba McEntire, and the Mormon Tabernacle Choir. 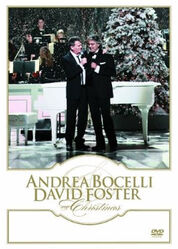 DVD2009
Decca Records
B0013751-09
ASIN B002UPA4ZY
Add a photo to this gallery
Retrieved from "https://muppet.fandom.com/wiki/Andrea_Bocelli_%26_David_Foster:_My_Christmas?oldid=1080333"
Community content is available under CC-BY-SA unless otherwise noted.