Anne Hathaway (b. 1982) is an actress whose film credits include The Princess Diairies and its sequel (both with Julie Andrews), the 2002 version of Nicholas Nickleby, Brokeback Mountain, and a starring role in The Devil Wears Prada. In 2013, she won the Academy Award for Best Supporting Actress for Les Misérables (as Fantine).

In 2002, Hathaway starred as Lili in the Encores! stage production of Carnival, alongside puppets created by the Muppet Workshop.

She appeared in the Sesame Street holiday special Elmo's Christmas Countdown in 2007, singing "I Want a Snuffleupagus for Christmas" along with Big Bird and Snuffy.

In 2019, she was announced as appearing in the third theatrical Sesame Street feature being directed by Portlandia’s Jonathan Krisel. 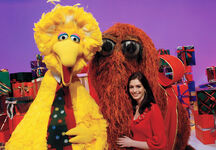 Wikipedia has an article related to:
Anne Hathaway
Retrieved from "https://muppet.fandom.com/wiki/Anne_Hathaway?oldid=1266638"
Community content is available under CC-BY-SA unless otherwise noted.