Annie DeLoo is a little girl who played the musical instrument known as the Klink in the Jingle Day Pageant. She confided in Mrs. Zabarelli that she had stage fright, but Mrs. Zabarelli gives her some encouraging advice, "We don't know what we can do until we try."

From then on, that phrase became Annie's words of wisdom. As she grew up, Mrs. Zabarelli passed the holiday baton to Annie, and she became the teacher. As an adult, she gave the same wisdom to her student.

The puppet was recycled and became Billy for From the Balcony with Statler and Waldorf and later appeared in several Henson Alternative productions. 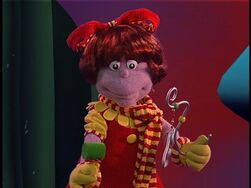 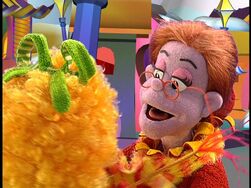 Older Annie DeLoo with her student
Add a photo to this gallery
Retrieved from "https://muppet.fandom.com/wiki/Annie_DeLoo?oldid=1080406"
Community content is available under CC-BY-SA unless otherwise noted.