Annie Sue is a young female pig singer on The Muppet Show. Miss Piggy saw the cute young singing pig as a rival for Kermit's attention and the audience's affection. However, Annie Sue saw Piggy as a role model. She was specially designed for her regular Muppeteer, Louise Gold.

Annie Sue appeared in the background during the second season, first in episode 214 in a group of hip Muppets (wearing a pink wig instead of her signature yellow curls).

She was then "introduced" as Miss Piggy's rival in episode 302. In this episode, Piggy is furious when Kermit hires a new girl pig singer, Annie Sue, especially when he introduces her as "the Muppets' delightful little lady of song." Annie Sue also helps Fozzie Bear with his memory act, easily winning over the crowd. When Kermit congratulates her, she modestly says, "I didn't do very much." To make Piggy feel better, Kermit lets her do the dramatic recitation she's always wanted to do, Wordsworth's "Daffodils," but the flowers on the set are filled with sneezing powder. Later, Piggy sees Kermit peck Annie Sue on the cheek, and she launches a vicious karate chop at him.

The Annie Sue threat popped up again in episode 306 when Annie Sue was given a part in the melodrama sketch. Annie Sue tearfully tells Kermit that she's too scared to go on, so Piggy volunteers to take her place. She's then tied to a railroad track, and Wayne, the hero of the sketch, doesn't save her in time.

After this, Annie Sue's star fell rapidly. She appeared periodically in the background throughout the rest of the series, and pops up in The Great Muppet Caper, but rarely had another featured role. Her one shining moment late in the series was appearing as Roger Moore's date at the end of Piggy's "On a Slow Boat to China" number in episode 524.

She did, however, feature in a number of Muppet books. Most notably there was a page about her in The Muppet Show Annual 1978. While in the Muppet Gulch cartoon in Jim Henson's Muppets Annual 1980 she played a key role in helping Marshall Kermit to solve a mystery.

Louise Gold performed Annie Sue in the Muppeteers' tribute at Jim Henson's memorial service. She could also be seen in the audience on Muppets Tonight.

Annie Sue returned in Muppets Most Wanted, but once again as a background character. She danced with The Newsman during "The Blue Danube" with Christoph Waltz and Sweetums (and spoke briefly, shouting "Wait for me, please!" once Crazy Harry's explosions sent everyone running), appeared in the female Muppets line in the show's opening when the Muppets did Madrid, attended the wedding (on the groom side), and sang a verse of the movie's finale song "Together Again" along with Dr. Bunsen Honeydew, Beaker, Link Hogthrob, Lew Zealand, & The Swedish Chef. 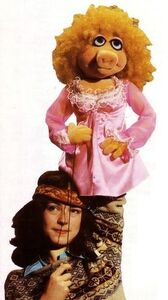 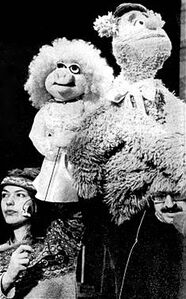