Antonio Banderas (b. 1960) is an actor perhaps best known as the voice of Puss in Boots in the Shrek films. He appeared with Big Bird on the set of Martha in 2010.

On Broadway he has appeared in Nine (with Jane Krakowski), as well as the feature films Evita (with Madonna), Philadelphia (with Tom Hanks) and The Mask of Zorro. He is married to Melanie Griffith. 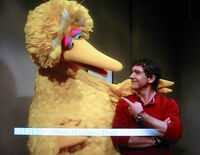 Banderas and Big Bird on Martha. 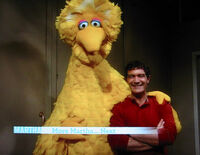 Wikipedia has an article related to:
Antonio Banderas
Retrieved from "https://muppet.fandom.com/wiki/Antonio_Banderas?oldid=1179668"
Community content is available under CC-BY-SA unless otherwise noted.