Anything Muppets (or "AMs", as they're referred to in the studio) are "empty" Muppet heads. Facial features, bodies and clothes can be added to make any kind of character. The corresponding family of monster puppets are known as the AM Monsters.

A similar group of puppets known as Whatnots appeared on The Muppet Show. Some Anything Muppets have also appeared in Muppet movies and specials.

During the first seasons of Sesame Street, they were known as "The Anything People" who could be anything they wanted. Usually the live actors, like Bob, would turn them into different characters. This concept was abandoned after a few seasons, although every once in a while an Anything Muppet character would take off his nose or lose his mustache.

Although these puppets were usually used to create human characters, animals were also sometimes concocted from Anything Muppets, until the late 1980s, including the Tortoise and the Hare, The Three Little Pigs, and Captain Vegetable. This practice could be seen in The Miss Muffet Play. Aliens, such as The Gonk and The Geefle, and monsters such as Bennett Snerf, Arlene Frantic, Fenwick, Rosemary and Pamela could also be made from Anything Muppets.

“Our general philosophy on "Sesame" is that we've always dealt with not being specific to races. That is why Jim Henson developed artificial colors or strange colors for all the humanoids.”
—Ed Christie describing Anything Muppets to the crew of Sisimpur[1] 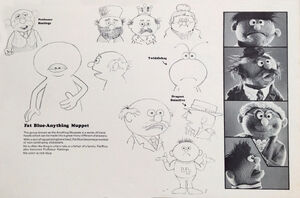 Fat Blue Anything Muppet from "The Muppet Character Guide" (1973) 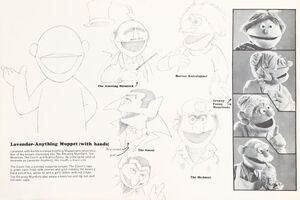 Lavender Anything Muppet from "The Muppet Character Guide" (1973)

The following types of Anything Muppets appear on Sesame Street; terms for these are derived from CTW style guides and other official sources: 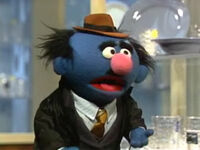 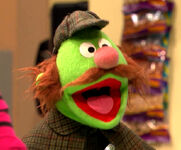 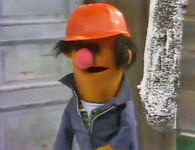 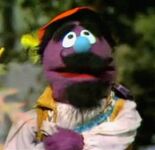 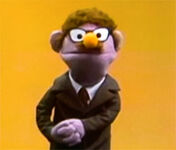 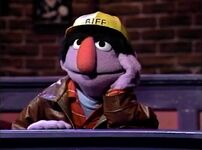 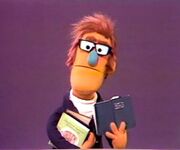 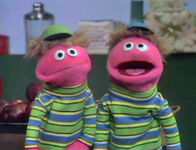 In addition, a few other types have been used less frequently; official titles are currently unknown.