Are Ernie and Bert gay?

“Bert and Ernie conduct themselves in the same loving, discreet way that millions of gay men, women and hand puppets do. They do their jobs well and live a splendidly settled life together in an impeccably decorated cabinet.”
—The Real Thing by Kurt Andersen, 1980[2]

“Bert and Ernie are two grown men sharing a house and a bedroom. They share clothes, eat and cook together and have blatantly effeminate characteristics. In one show Bert teaches Ernie how to sew. In another they tend plants together. If this isn't meant to represent a homosexual union, I can't imagine what it's supposed to represent.”
—Reverend Joseph Chambers radio show, 1994 [1]

Note that no skit has ever shown either character sewing, wearing the other's clothing, or cooking. Ernie tends to his plants alone.

On October 24, 2010, the Los Angeles Times published an article about how some gay advocates believed that Sesame Street was intentionally appealing more to gay viewers. The article commented on a tweet posted by Bert in June of that year: "Ever notice how similar my hair is to Mr. T’s? The only difference is mine is a little more ‘mo,’ a little less ‘hawk.’" Although meant as a reference to the recent release of the feature film adaptation of The A-Team, some interpreted the tweet's timing (around the time of a number of gay pride celebrations) and the use of the word "mo" (which could be read as short for "homo") as a sly, under-the-table effective outing of Bert. Sesame Workshop denied that they were intentionally trying to reach a gay audience, stating that "the idea that anyone would interpret this season that way never crossed our minds."[3]

The official Japanese Sesame Street Magazine regularly featured artwork solicited from fans throughout the 1990s. In the middle of the decade, the magazine featured at least two instances of the pair as a wedding couple, both times with Ernie in drag, wearing a wedding gown: 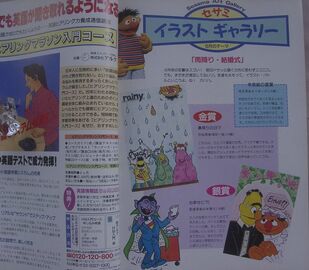 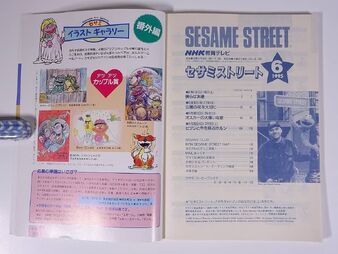 Another Sesame Street takeoff, the 2003 Tony Award-winning Broadway musical Avenue Q, includes two puppet characters, Rod and Nicky, who bear a striking resemblance to Bert and Ernie. In the musical, Rod is an uptight Republican banker, who is secretly in love with his sloppy, over-enthusiastic straight roommate, Nicky. Several numbers during the show focus on Rod's feelings for Nicky, including "Fantasies Come True", in which Rod dreams that he and Nicky rise from their single beds to share a romantic dance. Several members of the original cast (including John Tartaglia, Stephanie D'Abruzzo and Rick Lyon) were puppeteers who had worked on Sesame Street, but the musical has no connection with the television show. Advertising and merchandise based on the show include a disclaimer: "Avenue Q has not been authorized or approved in any manner by the Jim Henson Company or Sesame Workshop, which have no responsibility for its content."

“Bert and Ernie, who've been on Sesame Street for 25 years, do not portray a gay couple, and there are no plans for them to do so in the future. They are puppets, not humans. Like all the Muppets created for Sesame Street, they were designed to help educate preschoolers. Bert and Ernie are characters who help demonstrate to children that despite their differences, they can be good friends.”
—Sesame Workshop's consumer response prepared statement, 1993.

“There is nothing going on with Bert and Ernie, but there's this whole culture out there that thinks they are gay. It's clearly something that adults are projecting onto these characters. What they are is friends. In fact, if you think about the fact they are Muppets, they don't even have an existence below the waist.”
—VP of Education and Research for CTW Rosemarie Truglio, 1998[5]

“"They are not gay, they are not straight, they are puppets," says Sesame Workshop President and CEO Gary Knell. "They don't exist below the waist."”
—Sesame Street: A Celebration - 40 Years of Life on the Street (2009), p. 47.

“Bert and Ernie are best friends. They were created to teach preschoolers that people can be good friends with those who are very different from themselves. Even though they are identified as male characters and possess many human traits and characteristics... they remain puppets, and do not have a sexual orientation.”
—Sesame Workshop statement, August 11, 2011 (issued in response to a Change.org petition to have Bert and Ernie marry which circulated shortly after gay marriage was legalized in the state of New York)[6]

“As we have always said, Bert and Ernie are best friends. They were created to teach preschoolers that people can be good friends with those who are very different from themselves. Even though they are identified as male characters and possess many human traits and characteristics (as most Sesame Street Muppets™ do), they remain puppets, and do not have a sexual orientation.”
—Issued via Facebook on September 18, 2018[7] in response to the frenzy created by major media outlets to a Queerty interview with Mark Saltzman who used the characters as analogs for his own relationship when writing them decades after their creation.[8]

“Sesame Street has always stood for inclusion and acceptance. It's a place where people of all cultures and backgrounds are welcome. Bert and Ernie were created to be friends, and to teach young children that people can get along with those who are very different from themselves.”
—Issued via Facebook on September 18, 2018,[9] following the release of the previous statement.

“Someone who used to write for Bert and Ernie, who was gay himself [Mark Saltzman], said, "I always wrote for them as if they were gay." It was sort of an "aha moment", like "finally, we know the truth. Bert and Ernie are gay." And I regret how Sesame handled it at the time. [previous company statement]: "Even though they are identified as male characters and possess many human traits and characteristics... they remain puppets, and do not have a sexual orientation." And I think by saying that, it almost sounded like it would be something wrong with it if they were gay. If you relate to these characters as gay, that's fine, that's what makes Sesame so special. If you relate to them as not, that's fine. But, that denial, if you will, I think was a mistake.”
—Sesame Workshop President Sherrie Westin, 50 Years of Sunny Days.

“They're puppets. They don't exist below the waist!”
—Steve Whitmire, who performed Ernie on Sesame Street beginning in 1993, to students in a Q&A session at Carnegie Mellon. (September 10, 1997) [2]

“Oh, you had to ask that question. No, no. In fact, sometimes we are not even friends; he can be a pain in the neck.”
—Bert to Spencer Howson when asked if he and Ernie are "more than just good friends" in an ABC Brisbane radio interview, March 7, 2005. (sound bite)

I’m sure you’re aware of the online movement this last summer to get Bert and Ernie married. Do you have an opinion about what did or didn’t or should’ve happened?

[Long pause.] You’re going to have to talk to our P.R. department about that.

But you’re the guy who plays Bert. You don’t have any thoughts about his sexual orientation?

If you know the genesis of the characters, it’s an absurd idea. They’re like The Odd Couple. Just think of it like that. It’s Felix and Oscar from The Odd Couple. That’s what I believe the inspiration for Bert and Ernie was. If you look at the history, when the show first aired, that makes sense. 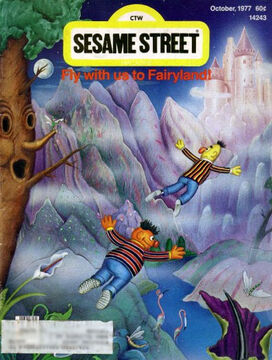 "Fly with us to Fairyland!"
Sesame Street Magazine cover, October 1977 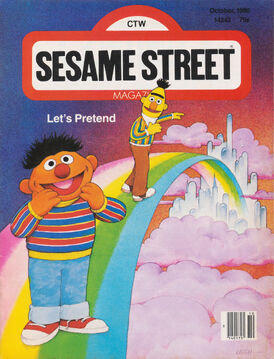 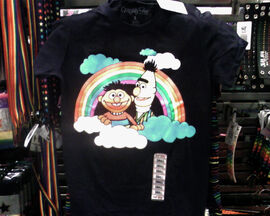 The duo under the rainbow, on an official t-shirt found in the rainbow symbol section at Hot Topic in 2009 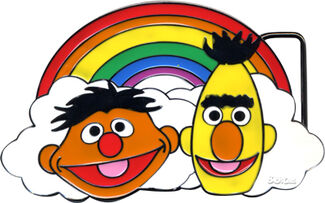 An official belt buckle produced in 2009

While the issue of Ernie and Bert's sexuality has never been addressed on screen, Sesame Street has made several references to the characters' interest in members of the opposite sex, on occasion.