Armstrong the Chicken Hawk is a co-host of The Animal Show. During season 1, he mostly hangs out with Ollie the Tapir; after the first season, Bunnie Bear becomes his cohost. The grumpy Armstrong is usually the straight man/victim in these team-ups.

The Armstrong puppet made its first appearance on The Muppet Show in episode 502, where he wore an eye patch during "Ain't Nobody Here But Us Chickens". He also made an appearance in the Sesame Street song "Let's Lay an Egg", and was among the many audience members of Muppets Tonight, sitting in the far back. 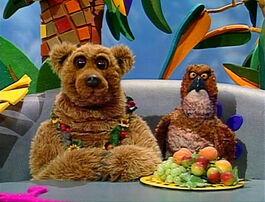 Armstrong with Bunnie Bear
Add a photo to this gallery
Retrieved from "https://muppet.fandom.com/wiki/Armstrong_the_Chicken_Hawk?oldid=1280634"
Community content is available under CC-BY-SA unless otherwise noted.