Beginning with Season 25 in 1993, Sesame Street's set expanded Around the Corner to feature a whole new block of locations. The new set first appeared in the season premiere, when Big Bird and his friends first visited the Park.

According to Sonia Manzano, "By expanding the street and going around the corner, we will have other places to hang out beyond the stoop of 123 Sesame Street, and we will be able to explore family issues which we think are so important to kids today."[1]

According to Martin P. Robinson:

“In Season 25, we opened up the whole "Around the Corner" set filled with new humans and dozens of new puppets. Remember the Furry Arms Hotel? It was a great cast and the plot lines were hilarious, but research discovered that kids couldn't keep track of all these people and puppets, making the shows visually exciting and entertaining for adults, but confusing for kids."[2]” 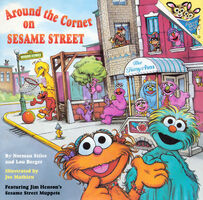 Around the Corner on Sesame Street
1994 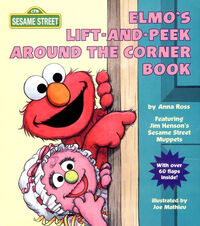 Elmo's Lift-and-Peek Around the Corner Book
1996

Before and after expansion

Before the set expansion in 1993, the street that would become "Around the Corner" was often just a painted backdrop if it was seen in shots at all. A city bus would frequently come from this direction to stop on the corner as seen in Episode 1396, among others. The apartment complex where David's mother lived could be reached from this street in Episode 0725.

After 1998, the Around the Corner area has been shortened into a dead-end alley way, usually where various wooden crates and metal oil barrels are kept. From time to time, Oscar's Sloppy Jalopy can be seen parked there (such as Episode 3921).

In Episode 4109, Abby Cadabby tells Big Bird that her home is "around the corner," although she doesn't specify which corner. 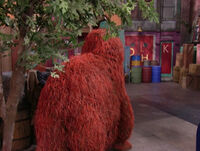 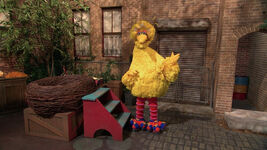