Arthur is a bird on Sesame Street (Japan), the Japanese co-production of Sesame Street. He is Pierre's best friend and together form a comedy duo in the traditional Japanese comedy form called “manzai.”

He is similar in design to Little Bird.

Arthur's puppet design is the same as that of the Alarm Clock Bird. He later became a stock puppet used on the American show, including Sesame Beginnings "Exploring Together" and Birdie in Little Children, Big Challenges: Divorce. 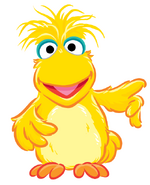 As he appeared in the Sesame Street Magazine.
Add a photo to this gallery
Retrieved from "https://muppet.fandom.com/wiki/Arthur?oldid=1283108"
Community content is available under CC-BY-SA unless otherwise noted.