Arthur Fiedler (1894-1979) was conductor of the Boston Pops from 1930 until his death in 1979. During his time with the ensemble, he made many popular orchestral recordings as well as family and children's records, some of which featured music from Sesame Street. Some of these songs can also be found on an LP of Joe Raposo songs called You Will Be My Music and a reissue CD called Wish Upon a Star.

In addition to commercially released pieces, Fiedler enjoyed playing Sesame material in concert. In 1971, the cast of Sesame Street was invited to Boston Symphony Hall for an episode of Evening at Pops. For this appearance, the maestro stepped aside to let Big Bird conduct the orchestra.

Caroll Spinney, interviewed as Big Bird in 1983, commented that Fiedler "handed me his personal baton and said, 'Take the sitck and go.'"[1] 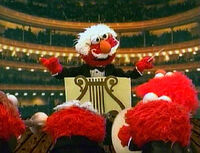 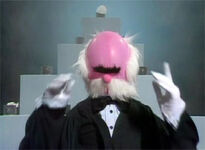 The Fiedler balloon conductor
Add a photo to this gallery

Wikipedia has an article related to:
Arthur Fiedler
Retrieved from "https://muppet.fandom.com/wiki/Arthur_Fiedler?oldid=1229369"
Community content is available under CC-BY-SA unless otherwise noted.