Start a Wiki
for other uses, see Artie (disambiguation)

Artie Springer is Eliot Shag's young friend on Dog City. He is in many ways the inspiration for Eddie, and he looks up to Eliot in the same way Eddie looks up to Ace Hart. His mother is Terri Springer. His favorite toy is Mr. Mookie.

The puppet previously appeared in the background of the original special. 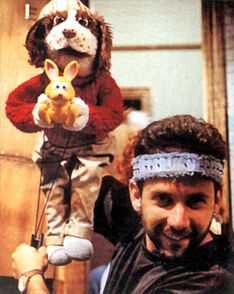 Artie and Muppeteer Joey Mazzarino
Add a photo to this gallery
Retrieved from "https://muppet.fandom.com/wiki/Artie_Springer?oldid=1080535"
Community content is available under CC-BY-SA unless otherwise noted.