Associated TeleVision was a television company that was part of the Independent Television networks in United Kingdom between 1955 and 1981. The network was formed as a means of two separate British companies to bid for one of the initial ITV franchises prior to its 1955 startup between the Associated Broadcasting Development Company and the Independent Television Corporation as founded by talent agents Lew Grade and Prince Littler. The network initially held a franchise weekdays in the Midlands region of England and a weekend franchise for London. After the bidding period of 1968, ATV was given a seven-day-a-week franchise in Midlands, but kept all of its valuable studios and production at their Elstree Studios near London.

Under the guidance of Lew Grade, ATV became notable as the "crass entertainment" network of the ITV franchises. With their connections to the entertainment industry, the network became notable for their programming in the 50s and 60s, particularly for shows such as Sunday Night at the London Palladium (of which one notable host was Bruce Forsyth) and for possession of talent including the orchestra of Jack Parnell for many of their programming. However, many of the shows that were particularly developed for the network were prominently exported by Grade and ITC as a means to reach out to a world-wide audience. These shows included the puppet series of Gerry Anderson, many notable dramas and spy series of the 1960s (including The Saint starring Roger Moore) and even many that included many notable and well known stars. (including Julie Andrews)

Jim Henson initially worked on certain TV shows and specials filmed through ATV and the studios. With The Muppet Show picked up by Grade, ATV became the official network of the series. All episodes were filmed in Elstree at ATV's studios and included talent such as Jack Parnell assisting in the Americans who were making this show abroad. ATV became the official distributor of The Muppet Show in Great Britain through the ITV networks, with its logo and identification (known as "Zoom 2") used both at the beginning of the show and with the final note played by Zoot. Outside Great Britain, the show was officially distributed by Grade's ITC Entertainment.

In 1981, during the determination of ITV franchises for the period starting in 1982, ATV was forced to be reorganized by the Independent Broadcasting Authority, particularly for its lack of local content for Midlands and its continued creation of content in Elstree. As part of this deal to keep its franchise, the company was forced to disconnect with Lew Grade's section of the company. On January 1, 1982, the company was reborn as Central Independent Television. 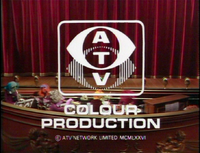 The Original Orchestra Shot with ATV logo from Season 1 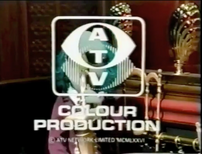 The Original Zoot Ending with ATV logo from Season 1 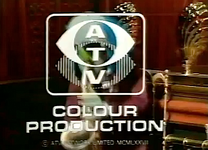 The Original Zoot Ending Shot with ATV logo from Seasons 1 and 2 in the U.K. 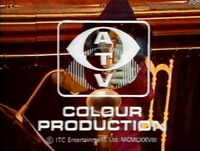 The Original Zoot Ending Shot with ATV logo from Season 3 in the U.K. 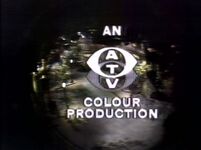 The ATV Colour Production logo from Julie on Sesame Street.
Add a photo to this gallery

Wikipedia has an article related to:
Associated Television
Retrieved from "https://muppet.fandom.com/wiki/Associated_TeleVision?oldid=1235951"
Community content is available under CC-BY-SA unless otherwise noted.