Athena is Hoots the Owl's granddaughter. She wants to be a singer when she grows up, and looks to Hoots for advice on how to be a great scat singer. She sometimes emcees at Birdland. According to episode 2304, she bears a strong resemblance to her grandmother (Hoots' wife).

Athena appeared on Sesame Street in 1986, during season 18. In season 20, her black beak was replaced with a softer, yellow beak, and she was given orange pupils. The character was dropped following season 22 and the character became a utility puppet. 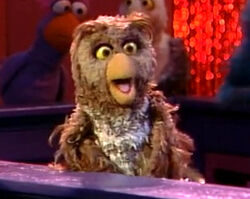 Athena's modified appearance
Add a photo to this gallery

Retrieved from "https://muppet.fandom.com/wiki/Athena?oldid=1195632"
Community content is available under CC-BY-SA unless otherwise noted.