Attack of the Killer Tomatoes is a 1978 comedy film, spoofing B horror movies (as well as films such as Alfred Hitchcock's The Birds, Steven Spielberg's Jaws, and Superman), in which tomatoes attack a small town. The movie spawned three sequels and a 1990 animated series, produced by Marvel Productions. 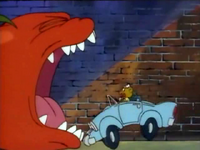 Scenes from the Muppet Babies... 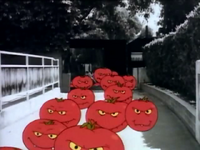 ...episode "The Weirdo Zone"
Add a photo to this gallery

Wikipedia has an article related to:
Attack of the Killer Tomatoes
Retrieved from "https://muppet.fandom.com/wiki/Attack_of_the_Killer_Tomatoes?oldid=1319674"
Community content is available under CC-BY-SA unless otherwise noted.