Aughra is the only one of her species, born from the rocks' need to perceive the world of The Dark Crystal. She is old enough to remember the world that existed before the race of Gelfling came to be, in the days before the Mystics and Skeksis evolved their separate codes. Her exact age is unknown, but she has existed for at least a thousand years. She studied the movements of the planets in the heavens and lost an eye observing a Great Conjunction of the Three Suns a thousand years ago. Jen was sent by his master to Aughra to fulfill the prophecy and find the shard that would make The Dark Crystal whole again.

In the closing credits, which follow the names with character descriptions in the manner of silent films and early talkies, Aughra is labeled as "A Keeper of Secrets." The fabrication team, who doubled on the UrSkeks, consisted of David Barclay, Jeremy Hunt, Paul Jiggins, Graeme Galvin, and Steve Court. 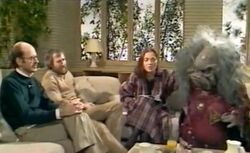 Jim Henson and Frank Oz are interviewed with Aughra
Add a photo to this gallery
Retrieved from "https://muppet.fandom.com/wiki/Aughra?oldid=806860"
Community content is available under CC-BY-SA unless otherwise noted.