Auntie Audubon is the aunt of Big Bird. She appears in Episode 3606 of Sesame Street.

During her stay, Auntie attempts to pass on the family heirloom of Dodo, a stuffed animal, to Big Bird. She explains that it's a family tradition to pass on Dodo, and prefers that Big Bird stop playing with Radar in favor of her toy. Big Bird is reluctant at first, but eventually grows to appreciate Dodo. Auntie, though, comes to realize that she can't give up Dodo just yet, and discovers that she loves it as much as Big Bird loves Radar. She and Big Bird happily play together with their respective favorite toys.

The puppet used for Auntie Audubon was originally made for the Board of Birds in the movie Follow That Bird. She is named after noted ornithologist and painter John James Audubon. 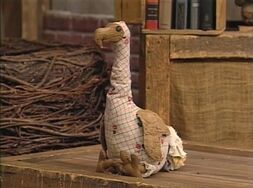 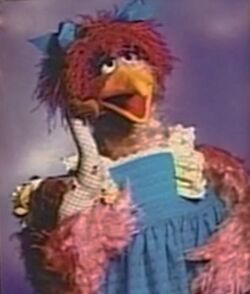 A photo of Auntie Audubon as a young chick, seen in her "Bird Family Album"
Community content is available under CC-BY-SA unless otherwise noted.
Advertisement