Aziz Ansari (b. 1983) is an American actor and stand-up comedian. He starred as Tom Haverford on the NBC show Parks and Recreation (with Amy Poehler, Nick Offerman, Rashida Jones, Aubrey Plaza, and Adam Scott). Ansari co-created and starred in the critically-acclaimed MTV sketch comedy show Human Giant and appeared in the films Funny People (with Adam Sandler), I Love You, Man (with Jason Segel and Paul Rudd), Observe and Report (with Seth Rogen), and 30 Minutes or Less.

Ansari appeared on Sesame Street during season 45, demonstrating the word "ridiculous" with Grover in a Word of the Day segment. 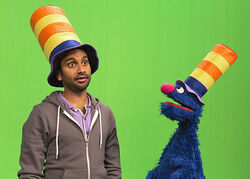 Add a photo to this gallery
Retrieved from "https://muppet.fandom.com/wiki/Aziz_Ansari?oldid=1289597"
Community content is available under CC-BY-SA unless otherwise noted.