B.J. (Bertwhistle Jr.) replaced P.K. in the sixth UK season of Fraggle Rock. He is the son of The Captain's neighbor, Mr. Bertwhistle. It's also mentioned that B.J. is a fan of football and supports Everton F.C. whereas Sprocket supported Arsenal.

Unlike P.K., B.J. initially enjoyed staying at the Lighthouse and being in the company of Sprocket. In the episode, The Gorg Who Would Be King, B.J. received news that the Lighthouse will soon be automated and that there will no longer be need for a keeper. In The Honk Of Honks, B.J. begins to pack away all his belongings to make way for the machines when he finally meets Gobo Fraggle. In the final episode Change Of Address, B.J. and Sprocket move out of the Lighthouse and move into a castle where B.J. becomes the caretaker. This is where B.J. and Sprocket discover the second Fraggle hole. 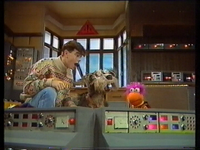 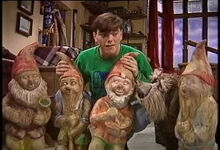 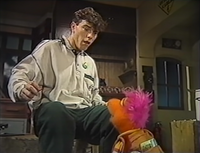 B.J. Meets Gobo For The First Time
Community content is available under CC-BY-SA unless otherwise noted.