"Baby, It's Cold Outside," is a popular duet in which one singer attempts to convince the other to stay rather than going home through a snowstorm. It was performed in episode 213 of The Muppet Show as a duet between Miss Piggy and a reluctant Rudolf Nureyev. In contrast to the original song, the attempted seduction took place inside a steam room, allowing for comic irony and a chance to show Nureyev in a towel. 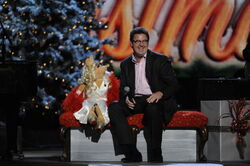 Miss Piggy with Vince Gill in 2011.
Add a photo to this gallery
Retrieved from "https://muppet.fandom.com/wiki/Baby,_It%27s_Cold_Outside?oldid=1080772"
Community content is available under CC-BY-SA unless otherwise noted.