Baby Animal, the most unruly of the title characters on Muppet Babies, is an infant version of Animal.

He always wears a white baby bonnet that keeps his wild, pink hair under control in the back of his head and is tied with a big, light blue bow in the front, and like his adult version, a vest and pants. Just like his adult-self, he speaks in a more fragmented way, focusing on keywords to get his point across.

He and Skeeter are the only main characters who did not appear in Muppet form in the dream sequence from The Muppets Take Manhattan, which launched the series, though a Baby Animal Muppet was later built for the TV special A Muppet Family Christmas.

Baby Animal appeared in the ending tag of each Muppet Babies episode, which included such appearances as breaking out of an egg or hanging on behind an airplane. These antics always involved Baby Gonzo being hurt or humiliated in some way, and, on a few occasions, other characters as well. His trademark line was "Go bye-bye!" He also had a distinctive laugh which followed, "Yaabababababababa!"

In the early seasons, Animal had thick eyelashes all around his eyes and his face would sometimes turn orange as a result of ink and paint errors. By the third season, Animal's design and animation became more consistent; his face was always pink and the eyelashes were only on the tips of his eyelids.

For the 2018 reboot series Muppet Babies, Baby Animal has been heavily redesigned. The CGI-nature of the show allows for a more puppet-like look by texturing the characters' skin and fur by imitating their respective fabric structures. The redesign provides Baby Animal with a truly fuzzy head of magenta hair. His head is less round and more oval shaped, his eyelashes are even thicker than before, he has more teeth (in the original, he only had two so far). He often walks or sits in a more prehistoric/animalistic pose, and still speaks in a more fragmented way. 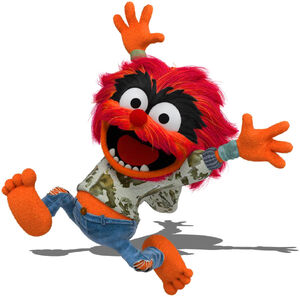