Baby Beaker appeared in several episodes of Muppet Babies as a baby version of Beaker. Like his adult counterpart feels about Dr. Bunsen Honeydew's inventions, Baby Beaker dislikes testing Baby Bunsen's inventions because they usually end up hurting him.

One of the few episodes to focus on Beaker is "Who's Afraid of the Big, Bad Dark?", in which Beaker, after watching a scary movie, is afraid of the dark, and the other babies try to get him out of his fear.

Another notable moment for Beaker is in "Musical Muppets," in which Beaker plays in a one-man band and then meeps to the tune of "Row, Row, Row Your Boat," with the help of a bouncing ball.

In "Good Clean Fun," it is revealed that Beaker has a peanut for a brain when Baby Bunsen looks into his head with a microscope.

For the 2018 reboot series Muppet Babies, Baby Beaker has been redesigned. The CGI-nature of the show allows for a more puppet-like look by texturing the characters' skin by imitating their respective fabric structures. While on the original show, the character's hair was more casually wild and sometimes sprouted a single, zigzagged hair on top, the reboot version's redesign provides him with the upstanding hairdo that is reminiscent of his adult-self.

His original turquoise nightgown and purple slippers are replaced by a light green lab coat, tie and sneakers. While his mouth is more flexible, allowing for a regular smile, rather than a perpetual frown, this iteration's change does not alter his traditionally meeping vocabulary. 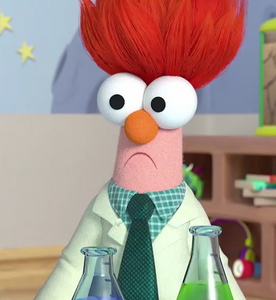