Baby Gonzo's Treasure Hunt is a 1986 Muppet Babies storybook. It was also adapted as a video storybook.

While eating their cereal, the Muppet Babies are sad because the rain will keep Nanny from taking them to the amusement park. Kermit tells Gonzo that with some imagination, he can find something just as fun to do, such as using the map on the back of the cereal box to find treasure.

Gonzo then imagines being on a pirate ship with a treasure map. His first mate, Mr. Kreegle, takes charge of the mission as they head ashore. Many pitfalls slow the pirates down, and Mr. Kreegle recalls that it is similar to the time they chased a shark who had stolen Blackbeard's hat.

After many adventures, the group finally makes it to the beach, where they begin to dig for the treasure. When they hit a treasure chest, they open it up and discover the buried treasure, cereal. Since everyone is hungry, they are quite excited and dig in. 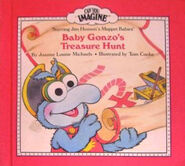 "Can You Imagine" series cover 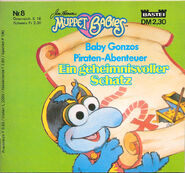