Nanny tells Baby Piggy, who is taking her bubble bath, that it is time to go to bed. Piggy wants to stay a little longer, but Nanny tells her she'll turn into a fish. Piggy thinks that's silly, but when she closes her eyes, she opens them to find she's a mermaid underwater. Piggy finds three little Yes-Fish and begins to question them, and they say "Yes!" every time.

When Piggy finds a Pearl sleeping inside the mouth of Mother-of-Pearl, she wants to grab her. The Yes-Fish make their remark and Piggy swims over only to find Mother-of-Pearl shutting her mouth. She tells Piggy not to trust the Yes-Fish because they will never tell the truth. However, Pearl obliges and sets off with Piggy. They soon are at a picnic where Piggy devours everything, even when Pearl tells her not to. Piggy becomes very sick and goes to Dr. Octopus for a pink pill. Piggy finds a large lavender bottle with writing saying "DO NOT OPEN", but Piggy doesn't realize that and doesn't even listen to Pearl's advice. After the Yes-Fish make their statement, Piggy opens the bottle to reveal two nasty sea sippers who slurp up the entire ocean.

Piggy climbs up to the top of a blue rock crying only to find it's a big blue whale named Blubbery Blue. Piggy's story makes him cry out big tears that make a new pool and eventually the ocean is back. Piggy realizes from Pearl that listening to the truth is very important, especially from the heart. When Piggy is back in her bubble bath, Nanny calls her to get ready for bed. Piggy still wants to soak, but Nanny tells her she needs her rest. When Piggy knows Nanny tells the truth, she does go to bed. 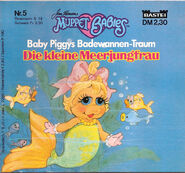