Baby Scooter is the Muppet Babies version of Scooter.

In contrast to the eager young "gofer" on The Muppet Show, Baby Scooter is an intellectual computer nerd, able to look up anything on his database. His twin sister is the more athletic Skeeter.

A photograph of Baby Scooter and Skeeter can be seen in Miss Nanny's house in the 2018 version of Muppet Babies. Scooter, along with Skeeter, has been confirmed to appear in the series during the second season.[1] 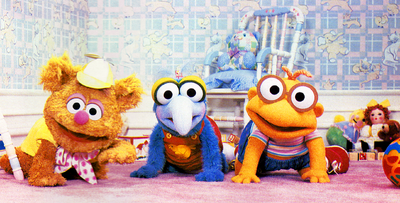 Baby Scooter (r.) with Baby Fozzie and Baby Gonzo
Add a photo to this gallery

Retrieved from "https://muppet.fandom.com/wiki/Baby_Scooter?oldid=1204586"
Community content is available under CC-BY-SA unless otherwise noted.