Next to the stage of The Muppet Theatre, Backstage Right is the most seen and perhaps best-known location on The Muppet Show. It serves as the hub between the stage and most of the theater's other locations, including the dressing rooms and stage door, and is where many of the show's plots take place.

The backstage set included a stairway leading to an upstairs landing, with three visible dressing room doors which were used interchangably for Miss Piggy's dressing room and the guest star's dressing room. There was a stairway leading down to the stage door by way of reception which led to the lobby, and most likely to the prop room. To the left of both staircases was a door which led downstairs to the canteen. There was also a counter desk backstage primarily used by Kermit and Scooter, and by the top of the stairs was a small ledge that held different objects from episode to episode (the bust of Beethoven, a dress form, and Gaffer could be seen occupying this spot).

The set was decorated differently almost every week, with many props and costumes (Marvin Suggs' outfit can be seen in the background of episode 109). Sometimes a prop from a previous episode would be seen, and often something that had to do with the guest star (such as a poster for a Raquel Welch movie in the Raquel Welch episode).

In Of Muppets and Men, head Muppet Show art director David Chandler discussed the design process. An important concern was making the sets look like the backstage of a real theater, and yet match the stylized nature of the Muppet characters. In addition, there were logistics problems inherent in both keeping the set in scale with the Muppets and leaving space for the performers, which Chandler discussed:

“We knew it had to be built on platforms, and that we had to provide room for the puppeteers to work, also it had to look old and used, but the big problem was scale. If you look carefully at that set, you'll see that the staircase is full size but the doors at the top of the stairs are about seven-eighths the size of a regular door. The whole thing has to work for both guest stars and puppets. That's not easy to achieve. And then where do you find the props that fit in with all this? You need miniatures. We had people scouring antique shops and junk stores all over London. Luckily, we discovered that there were many beautiful Victorian toys, detailed just like the real things they were modeled on, which were the perfect size.”

This set was seen in almost every episode of The Muppet Show. Notable exceptions include episodes 208, 224, and 308. Of them, only one was a show that was at the theater, or was even a show at all.

The backstage set was not seen for years after the TV special The Muppets Go to the Movies. Since then, the set has been rebuilt for productions such as the Weezer music video "Keep Fishin'," It's a Very Merry Muppet Christmas Movie and a commercial for CanTeen.

The majority of the story for The Muppets Celebrate Jim Henson takes place in a setting modeled after that of The Muppet Theatre's backstage set. The script never reveals or even hints at its connection to the Muppet theatre, but its similarity suggests a setting of familiarity, perhaps meant to have been the backstage area updated and remodeled for the times.

The area was seen in the fantasy sequences in the Muppet Babies episode "My Brother Vinny."

Backstage Left (BSL in stage directions) was hardly ever seen, and even more rarely inhabited. On a few occasions, performers would exit Stage Left, but almost never shown there. One example includes Gonzo entering the stage from that side to perform his cannonball catching act in episode 223. In The Muppets, backstage right is marked with an area to crossover to stage left. 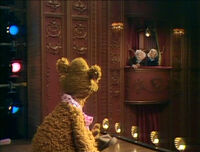 The performer's view of Backstage Left 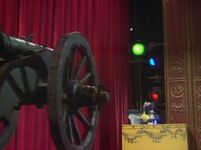 Gonzo prepares to catch a cannonball, having just entered from Backstage Left
Add a photo to this gallery

For the 2011 feature film, The Muppets, the backstage set was recreated for the film by production designer Steve Saklad. The backstage set was expanded from what was seen for The Muppet Show. A second tier of dressing rooms was built, while the color schemes and look of the original was retained, including Kermit's Desk and the downstairs stage room door. 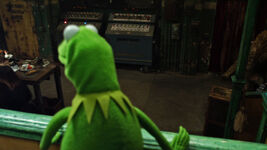 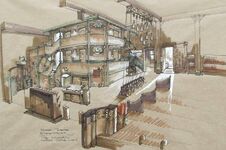 Production design sketch by Steve Saklad for The Muppets. 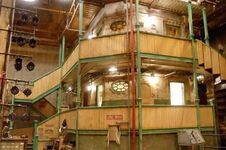 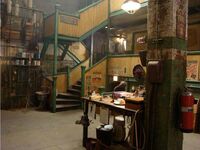 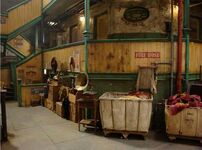 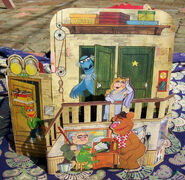 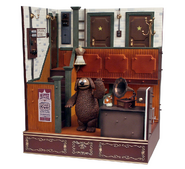 Backstage Playset
2004
Add a photo to this gallery
Retrieved from "https://muppet.fandom.com/wiki/Backstage?oldid=1259376"
Community content is available under CC-BY-SA unless otherwise noted.