The Backstreet Boys are a popular singing group who have been active since the late 1990s. They made a guest appearance in a 2002 episode during Season 33 of Sesame Street to sing "One Small Voice" with Elmo.

One of their members, Nick Carter, also appeared on Sesame Street with his younger brother Aaron Carter.

The band was referenced on the Mopatop's Shop episode "Mopatop of the Pops" with the bunny band, the Backstreet Bunnies. 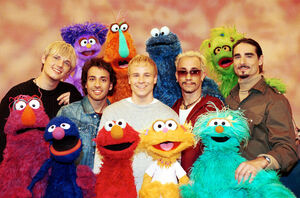 Wikipedia has an article related to:
Backstreet Boys
Retrieved from "https://muppet.fandom.com/wiki/Backstreet_Boys?oldid=1257927"
Community content is available under CC-BY-SA unless otherwise noted.