Bad Bart is a cowboy who appears in a series of Old West sketches on Sesame Street. Like most menacing-looking cowboy characters, it seems like he's going to make trouble, but he turns out to be harmless.

He originally appeared in season 5, then made a comeback in season 15 with a new revamped appearance. 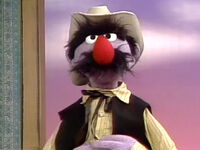