Bad Polly, sometimes called Polly Lobster, is Long John Silver's crustacean companion in Muppet Treasure Island. Polly is a lobster whom Silver "raised from a fingerling". He works closely with fellow pirates Clueless Morgan and Mad Monty to cause trouble for the heroic crew of the Hispaniola. He steals the map to Treasure Island, and is eager to start a mutiny.

In 2004, Palisades Toys released a Bad Polly figure as an accessory to their Captain Smollett Action Figure.

In books, Polly made appearances in the "Muppets Meet the Classics" installments The Phantom of the Opera and Fairy Tales from the Brothers Grimm. In the latter, he stars in the story of "Pepe and Polly," referencing Hansel and Gretel. 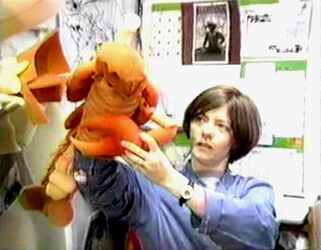 The Bad Polly puppet in development, with Rollie Krewson 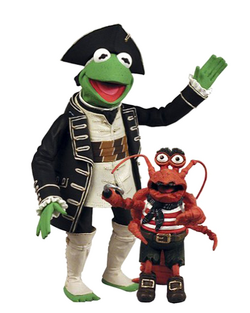 Bad Polly action figure
Add a photo to this gallery
Retrieved from "https://muppet.fandom.com/wiki/Bad_Polly?oldid=1273533"
Community content is available under CC-BY-SA unless otherwise noted.